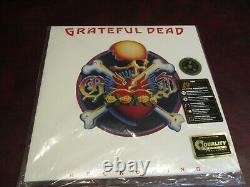 Featured in Michael Fremer's Heavy Rotation in the May 2012 Issue of Stereophile! Cut From the Original Analog Masters and Pressed on 200-gram Vinyl At Quality Record Pressings! One of the Most Enduring Bands of All Time FINALLY Gets The Analogue Productions Treatment! Rolling Stone 2015 Readers' Poll: The 10 Best Jam Bands: The Grateful Dead Rated 1st! They did so with the express purpose of recording in an intimate space the opening portion of each show - a stripped-down acoustic set of Jerry Garcia and Bob Weir playing acoustic guitars, Brent Mydland playing piano, drummers Bill Kreutzmann and Mickey Hart playing reduced kits and bassist Phil Lesh turning his electric volume down considerably.

The group chose a set list of classic folk and country tunes mixed with their originals. The record is a very obvious ode to the band's early 1960s origins of folk, bluegrass and country. These are the sounds from which this whole long, strange trip was born, and Garcia in particular shines radiantly. The sound - as with all records that are stripped to their bare essentials and rid of an overcrowded electric set - is right up there with the very best the Dead ever released. This is also the record for those on-the-fence fans that could do without the wandering-away-from-the-pocket sound that characterized much of the Dead's music. The songs here are tight and compact while still mostly delicate. Recommended without hesitation for both the musical craft and especially the recording that's nothing less than astonishing, as is the depth of the pressing blackness behind the music. There's no contest between the original pressing and this reissue cut by Kevin Gray from the original analog tapes and pressed at Quality Record Pressing.

Vividly three-dimensional images as big as life popped forth from a background of absolute silence. Acoustic-guitar transients were so natural that they were genuinely surprising. Details that passed unnoticed on the original emerged to fill out an entrancingly embroidered tapestry of music. The contextual space of the venues neatly overlaid themselves on my listening room -- and in order to be more like the real thing the Dead would have had to be in my listening room, and well behind the front wall in some cases. " "Mastered by Kevin Gray from the original master tapes and pressed on massive 200-gram vinyl biscuits at Kassems Quality Record Pressings, this Reckoning features a foldout cover with full credits printed on thick, nearly archival-quality stock.

The records themselves are absolutely flawless and dead quiet. It is my considered opinion that Quality Record Pressings is making the finest LPs that have ever been heard. I honestly cannot think of one thing about this release that could be improved.

Oh Babe It Ain't No Lie. It Must Have Been The Roses.

Been All Around This World. & TYPE IN GRATEFUL DEAD INTO THE SEARCH FIELD WITHIN OUR STORES SECTION AS YOUR PERSONAL CODE AND ALL INDIVIDUAL TITLES + INFORMATION WILL APPEAR. Collectors Alert : Many of these Vinyl Titles will never be available again. This means that this specific title is now out of print forever and there are very few remaining is sealed condition. This title is going to skyrocket in value & price over the next few months. So Don't Miss Out on being one of the last people to own this outstanding pressing.

This is one the last pressing you will ever see at this price. FACTORY SEALED OUT OF PRINT PRODUCT is IRREPLACEABLE and therefore NOT RETURNABLE.

The nicest thing you can do for your stylus and your ears. The ultimate record -- the way music was meant to be heard and of superior quality for any Audiophile. You should never pass up the opportunity to upgrade your collection. They're each very limited in their pressings and disappear with extraordinary quickness from the vinyl market. This causes prices to skyrocket because once they are gone, they are gone forever! Don't second-guess yourself with this chance to upgrade your collection because before you know it, the opportunity will have passed forever. The item "GRATEFUL DEAD RECKONING 200 GRAM ANALOGUE PRODUCTIONS COLLECTORS RARE QUALITY LP" is in sale since Tuesday, May 19, 2020.

This item is in the category "Music\Records". The seller is "mymusicfix2" and is located in Lake Forest, California. This item can be shipped worldwide.