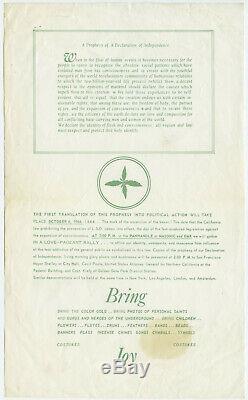 This is an ultra ultra rare and important item! It is a guaranteed original (printed before the event) small poster / oversize handbill announcing an event dubbed The LOVE PAGEANT RALLY. This was a rally and concert on October 6, 1966, as stated on the poster 666... The mark of the ascension of the beast.

The date that the California law prohibiting the possession of L. Comes into effect, the day the fear-produced legislation against the expansion of consciousness. In the Panhandle at Masonic and Oak in San Francisco.

Grateful Dead and Big Brother and the Holding Company with Janis Joplin provided the music although neither are specifically mentioned on the item. This was an important historic event and also a very early appearance of Janis with Big Brother. Here's a short write-up about the event from WIkipedia. The Love Pageant Rally took place on October 6, 1966 the day LSD became illegal in the'panhandle' of Golden Gate Park, a narrower section that projects into San Francisco's Haight-Ashbury district. The'Haight' was a neighborhood of run-down turn-of-the-20th-century housing that was the center of San Francisco's counterculture in the 1960s.

The major instigators of the rally were Allen Cohen and artist Michael Bowen, the creators of the San Francisco Oracle , which first hit the streets in September 1966. The occasion was the banning of LSD, by the California legislature in Sacramento, an enactment which virtually created a neighborhood of outlaws in the Haight, where'acid' was a staple of community culture. Since the new law was to go into effect on October 6, 1966, Cohen and others related the event to the number of the Beast of Revelation. On a more serious level, busts for drugs were ramping up locally and on the national level, and confrontations between the hippie communes and the local police were getting more intense and led to street protests and rioting, followed by neighborhood curfews. A better form of protest, more suited to hippie culture was needed. "Without confrontation, " said Allen Cohen, we wanted to create a celebration of innocence. We were not guilty of using illegal substances.

We were celebrating transcendental consciousness. The beauty of the universe. Posters advertising the event invited participants to Bring the color gold...

Thousands showed up for the event, read a "prophecy of a declaration of independence" written by Cohen, after which many placed a tab of acid on their tongues and swallowed in unison. Music was provided by the Grateful Dead and Janis Joplin. Both invited to play by Michael Bowen for free. Ken Kesey was on hand with the Merry Pranksters in the legendary bus. The Love Pageant Rally drew several thousand people.

It was a warm-up for the Human Be-In. The following January, which brought 30,000 together and established media attention to hippie culture that then led to The Summer of Love. The poster / handbill measures 8 1/2 x 14 inches and is printed in green ink on white paper.

There at NO tears, hoels or significant damage. A competant paper conservator could make this look even better than it already does. It would frame beautifully and would be the cornerstone of your Grateful Dead or Janis Joplin or Acid Test or LSD collection. It is guaranteed to be 100% original and authentic from the time period. If you are outside of the U. If you are interested in this kind of material please view my store, Concert Posters Plus, and sign up for my Store Newsletter. I add items frequently and also offer periodic sales / discounts and specials. Get notified when I run a special sale! GRATEFUL DEAD JANIS JOPLIN Original 1966 LSD ACID Concert Poster" is in sale since Wednesday, June 19, 2019.

This item is in the category "Entertainment Memorabilia\Music Memorabilia\Rock & Pop\Artists G\Grateful Dead\Posters". The seller is "postermaniax" and is located in Brooklyn, New York. This item can be shipped worldwide.