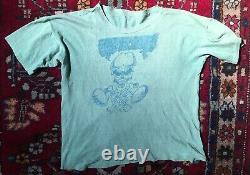 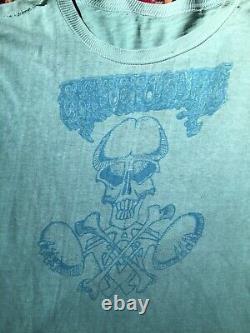 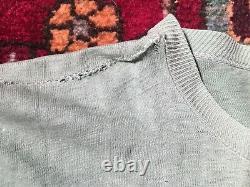 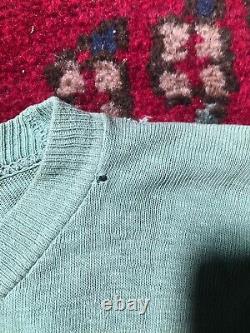 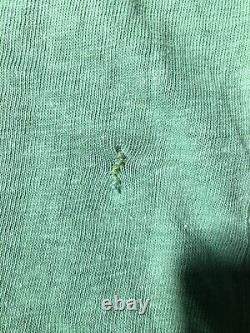 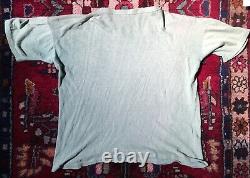 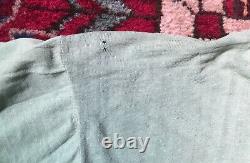 This is one of the earliest ever Grateful Dead t-shirts. The first was the famous Pig Pen shirt in 1967, and then a "bubble letter" one in about 68, and then it is unclear whether there was another before this one, which Rick Griffin designed at the time he was designing the Aoxomoxoa album cover in early 1969. The Good Ol' Grateful Dead shirts and the first "Stealie" shirts, as well as a couple of others, didn't appear until the beginning of 1970. There are some photos I have seen of a guy in the road crew wearing one of these Griffin shirts at a festival that looks like it could be Woodstock, but I can't be 100% sure.

It could be just about any festival with big scaffolding like Woodstock, but In any case it is definitely either 69 or 70, so for sure this shirt dates to that time. Like I say, there were at least 3 shirts made sometime in 69 and 70, but which came first when is hard to determine. I think this is the earliest of them.

In any case it is very early and very rare. This shirt is in great condition, with just a few small pinholes (see photos), one very tiny 1/4 repair, and a little fraying along the top seam.

These are all minor issues and the shirt is actually in lovely vintage shape. It measures 22 from pit to pit when lying flat and unstretched. And 22 1/2 from the shoulder seam to the bottom hem. The item "SUPER RARE VERY EARLY GRATEFUL DEAD T-SHIRT Ca.

1969 Rick Griffin Aoxomoxoa" is in sale since Thursday, May 28, 2020. This item is in the category "Entertainment Memorabilia\Music Memorabilia\Rock & Pop\Artists G\Grateful Dead\Apparel". The seller is "missesknowitall" and is located in Los Angeles, California.