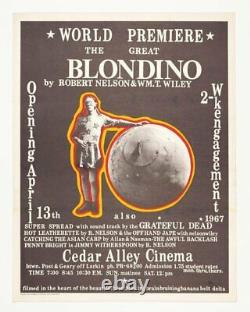 Description: 17 ½ in x 22 ½ in. Very good condition, with some barely discernible color ink stains around the print. A rare print of the poster for the World Premiere of Robert Nelson and William T. Wiley's 1967 art house film, The Great Blondino.

Shot without a script or preconceived narrative, the film follows an anachronistically outfitted protagonist as he explores a world of beauty and cruelty. The soundtrack to the film was provided by the Grateful Dead.

Subject: Film, Posters, Flyers & Handbills. Boo-Hooray is dedicated to the organization, stabilization, and preservation of the 20th and 21st century cultural movements, specializing in ephemera, photography, and book arts. We publish books, catalogs, artists' books and LPs, as well as stage exhibitions all over the world. This listing was created by Bibliopolis. This item is in the category "Art\Art Posters". The seller is "boo-hooray" and is located in this country: US. This item can be shipped to North, South, or Latin America, all countries in Europe, all countries in continental Asia, Australia. Wiley