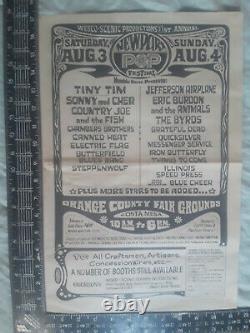 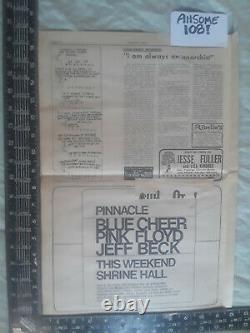 August 3 & 4 1968 NEWPORT POP FESTIVAL Full Page Ad, Held at the Orange County Fairgrounds with groups like Grateful Dead, Jefferson Airplane, The Animals, The Byrds, Quicksilver Messenger Service, Iron Butterfly, Blue Cheer, Chambers Brothers, Canned Heat, Country Joe & the Fish, Steppenwolf, Etc.. It Is In Very Good/Excellent Condition. The one issue is that the original owner, for some reason, cut out the group ("James Cotton Blues Band") on the bottom of the left column.

It was "doctored" with newspaper from the same issue so that it's disappearance is barely notice-able. This is not a copy or facsimile, but the actual Poster-Style Promo Ad from a 1968 So. It is in overall Excellent Condition. If you really enjoy vintage items, you can have a real keep-sake from back in time, or a great gift for a special friend.

Most vintage ads were printed for very small circulation and many are printed for one specific and/or special issue and are therefore, highly collectible and one of a kind. These great vintage collectibles are a very nice alternative to the high cost of rock & roll memorabilia- and will be admired for years to come!

The 1968 event was originally scheduled to be held inside the Orange County Fairgrounds in an outdoor pavilion. The fairgrounds are on Newport Boulevard, just a short distance from Newport Beach (hence the name). The 1968 event's advance ticket sales were triple of what was expected, and it became evident that no area inside the fairgrounds could hold even 25,000 people, let alone the near 100,000 now predicted. In the last three days before the show, it was moved to one of the adjoining parking lots of the fairgrounds. Fencing, staging, sanitation, and food concessions had to be organized within just three days. Fencing in some areas consisted of wire blankets and/or tarps thrown over as a visual block. People without tickets on the outside would "storm the fence" and got in for free. None of the commercial concessionaires were prepared for the event, and they all ran out of food and drink halfway through the first day. Water was provided throughout the event by garden hoses from inside the fairgrounds, but attendees had to provide their own containers and give up their viewing spot to reach the water. A broken water supply pipe provided a mud bath that a number of people jumped in, but people realized that the sun would bake the mud into a hard cover, so they stopped.

There were plenty of porta-potties available at the rear of the hastily assembled grounds. There was no shade in the primary viewing area, and partiers were sunburned. The weather was a typical August day in sunny Southern California. Those without hotel reservations had no place to stay.

Was hired to promote the show and hosted the event with Wavy Gravy. This item is in the category "Entertainment Memorabilia\Music Memorabilia\Rock & Pop\Artists G\Grateful Dead\Posters". The seller is "ahsome108" and is located in this country: US.